A positive month for Germany’s True Fleet Market, an even better one for SUV 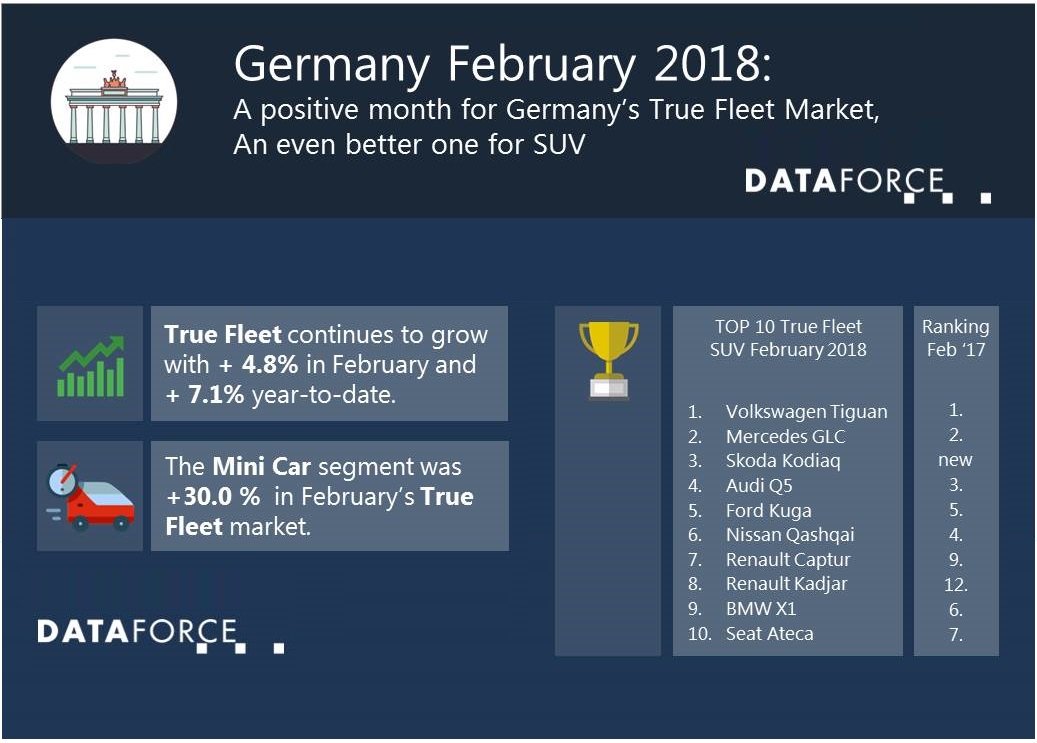 The promising start for the German passenger car market continues. Following an impressive + 11.6% in January, this February scored some further encouragement with a + 7.4% when compared to February 2017. The performance of the different market channels indicates a healthy development: While the volume of rental cars and self-registrations on dealerships and car manufacturers dropped by – 1.4% the positive growth from both Private (+ 21.3%) and True Fleets (+ 4.8%) channels grew significantly.

Despite the good overall result for the fleet market the picture was pretty mixed on brand level. While the top four brands (Volkswagen, Audi, Mercedes and BMW) as well as Ford in sixth position all suffered declining volumes over last February’s results, some makes really shone out. Skoda (5th) and Opel (7th) increased their volume by 22.7% and 26.0% respectively, Renault (8th) even by 32.4%.

The growth for Skoda was mainly fuelled by the two SUV models Karoq and Kodiaq, though the Octavia had a very good month as well with a + 13.7%. Within Opel we saw a whole squad of successful models with Adam (+ 76.8%), Astra (+ 9.7%), Insignia (+ 132.1%) and Vivaro (+ 17.5%) posting notable growth and additional volume was of course generated by the SUVs Mokka X, Crossland X and Grandland X. The brand from Rüsselsheim achieved its best market share since January 2013 making up 6.4% of the True Fleet Market for February.

Outside the top 10, Volvo and Citroën should definitely be mentioned. With close to 1,200 new car registrations Volvo in 11th place increased their volume by a remarkable + 55.6% and overtook both Nissan and Peugeot in the ranking. Now with the 2018 car of the year, the all-new XC40, entering the market we can certainly expect further growth from the Swedish manufacturer.

The comparison with February 2017 clearly shows a heavy decline for Diesel with its share dropping from 69.7% to 60.4% in True Fleet. But obviously the steady downtrend trend from the second half of 2017 seems has come to an (temporary) end as the Diesel share rose in January and February 2018.

However, you might need to go back even further to find a February with a comparably low diesel share as in 2018. The reason is that 2009 still had a decent number of private diesel registrations but these were outnumbered by the flood of cheap petrol cars that came in from a scrappage scheme.

Analysing the performance of the vehicle segments two groups are especially remarkable in terms of volume growth. The Mini Car segment rose by amazing 30.0% over February 2017 and the Volkswagen up! and Smart ForTwo in first and second position were not the only ones to show very good performances. The Fiat 500, Opel Adam and big brother of Smart ForTwo, the ForFour also showed excellent growth rates.

Meanwhile, the success story of the SUV segment continues. Despite the fact that the previous year was already very strong, 15 out of the top 20 SUV models showed a higher volume when compared to February last year. While an overall surplus of 19.5% almost seems to be “normal” for SUV, in fact the share in February was the highest ever with 25.4%. The Volkswagen Tiguan defended its lead over the Mercedes GLC while the Skoda Kodiaq jumped from 5th into 3rd, its first time ever in this position. A huge amount of models have also just entered the market place and although currently positioned a bit further down the rankings these models listed will certainly contribute to the ongoing SUV boom in the near future: Hyundai Kona, Jaguar E-Pace, Kia Stonic, Seat Arona, Skoda Karoq, Volkswagen T-Roc, Volvo XC40 (to name just a few).