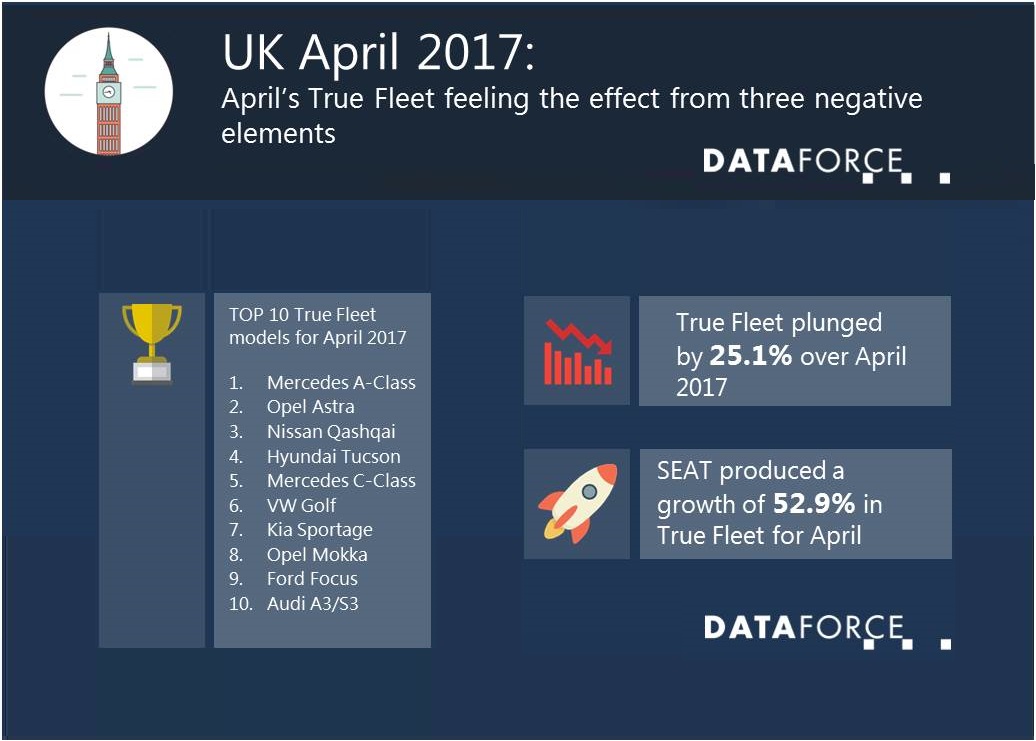 With April bringing a triple combination of negative elements to effect the market it was perhaps a foreseeable downturn for the both the Total Market and True Fleet. Three less business days, the usual hangover from the UK plate change plus the somewhat confusing new Vehicle Excise Duty (VED) all contributed to the less than stellar – 19.8% for the Total market. While True Fleet suffered with a – 25.1% it can possibly take some relief from the fact that last year’s April was its highest on record since Dataforce records began in 2004. The Private Market took the hardest hit with a – 28.5% and somewhat predictably the Special Channels had the highest April month on record with Dealership and Manufacturer’s contributing the most (setting their own record for April).

Within the manufacturers’ Top 20 it was not doom and gloom, especially for three brands that were able to produce positive growth from what was obviously a challenging month.

Mercedes moved itself two places into 3rd after producing a + 5.1%, no doubt helped by the new E‑Class more than doubling it numbers from last April. The Mercedes A-Class also took 1st place in True Fleet model ranking and while this was good news there was more to come, Mercedes is also showing the highest year-to-date volume growth for UK True Fleet market.

Hyundai also performed well beyond last year’s April, pushing its growth rate to a + 41.0%, taking it inside the Top 10 (7th place) for the 2nd month in a row. Three individual models had triple-digit volume growth for the month, The Tucson, Ioniq and the i10. Touching on the Ioniq briefly we see that not only has it managed to outregister the iX20, i40, H1 and the Santa Fe year-to-date but is also currently 9th in the alternative fuels model ranking.

The final manufacturer to produce positive growth was SEAT which posted a rise of 52.9% for April, the highest growth inside the Top 20 securing it 12th place. The upturn was powered mainly by the Ateca that secured 24.0% of SEAT’s volume, but the Leon and Alhambra are not to be overlooked, as they also managed three-digit volume gains. SEAT’s 2017 market share in True Fleet is also in need of mention, prior YTD share of True Fleet stood at 1.19%. This year they have more than doubled their share and currently stand at 2.45%, a pretty remarkable feat considering they have one of the UK’s smallest model line-ups. So with the possible end-of-year-release of the Arona (Small SUV) helping expand the line-up, the brand’s fleet numbers should continue to swell.