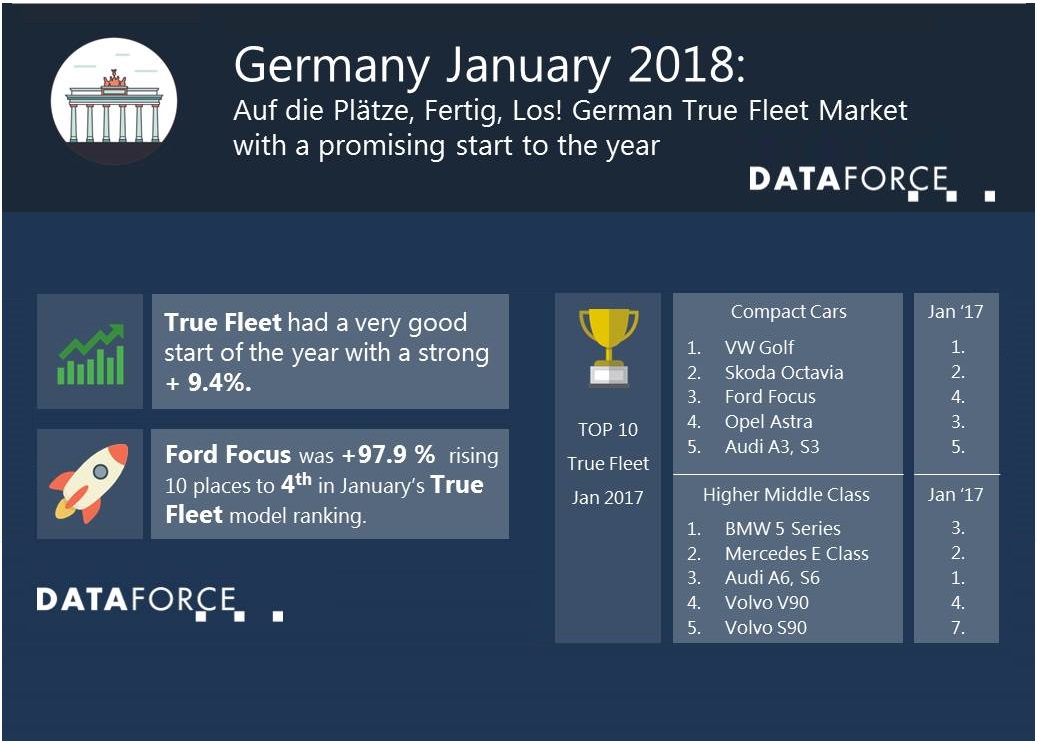 Without a doubt the German passenger car market has started 2018 rather promisingly. With more than 269,000 new registrations it was the highest January volume ever. And although rental cars and self-registrations on dealerships and car manufacturers were a little higher when compared with January 2017, the market growth’s main drivers were the Private (+ 24.5%) and True Fleet (+ 9.4%) channels. For the fleet market this was the biggest percentage growth since May last year.

A lot of brands were able to participate in this True Fleet Market upshift: No less than 18 out of the top 20 recorded an increase in January. Behind the two market leaders Volkswagen and Mercedes, Ford, with a massive rise of + 19.1%, was able to take 3rd place on the podium for the first time ever in the German True Fleet Market. The Focus contributed heavily to this success almost doubling its volume over January last year and ranking 4th behind Volkswagen Golf, Volkswagen Passat and Skoda Octavia.

BMW in 4th place and Audi in 5th were pretty close with only 35 and 120 registrations respectively separating them from Ford. They were followed by Skoda, Opel, Renault and SEAT while Toyota completed the top 10 with a really impressive boost of + 66.3%.

Further down the ranking we should definitely mention Land Rover. Ranked 16th, the UK-based manufacturer achieved a new record market share of 1.2% and its second highest volume ever. Slightly decreasing volumes for both the Range Rover Evoque and Discovery Sport were overcompensated by gains stemming from the bigger models Range Rover and Discovery alongside some additional support from the all-new Range Rover Velar.

Compact and Higher Middle Class on the rise

Analysing the performance of the vehicle segments we found two groups that have had a remarkable month in terms of volume growth, Compact Car segment rose by + 28.9% while the Higher Middle Class even registered a + 43.9%. As mentioned above the Ford Focus was really going strong but Volkswagen Golf, Renault Megane, Seat Leon and Audi A3 also contributed significantly.

Within the Higher Middle Class the “big three” of BMW 5 Series, Mercedes E-Class and Audi A6 (for which the successor will be revealed at the beginning of March during the Geneva Motorshow) were all in pretty good shape followed by the Swedish contenders V90 and S90 from Volvo. Interestingly we see how different the choice of fleet customers is regarding the bodystyle: while almost 90% of Audi’s A6 are sold as Station Wagon the share of the E-Class is only slightly more than 50%. The 5 Series from BMW finds itself in between with the Station Wagon garnering a share of 67%. This raises the question for Audi whether these differences are coming from the A6 Avant’s strength to attract buyers looking for a roomier model from other brands or a weakness in attracting those preferring a classic sedan bodystyle with their model.

This group of business limousines and wagons is still dominated by diesel engines with a share of almost 80%. Across all vehicle sizes the diesel share is of course lower than in January 2017

but – believe it or not – higher than in last year’s November and December. And after taking a quick look into the tactical channel of dealership/manufacturers, we saw a comparable volume of registrations and almost the same phenomenon. This certainly leaves us un-sure as to whether this is the start of a trend or the OEMs needing to fulfil un-used diesel capacity.