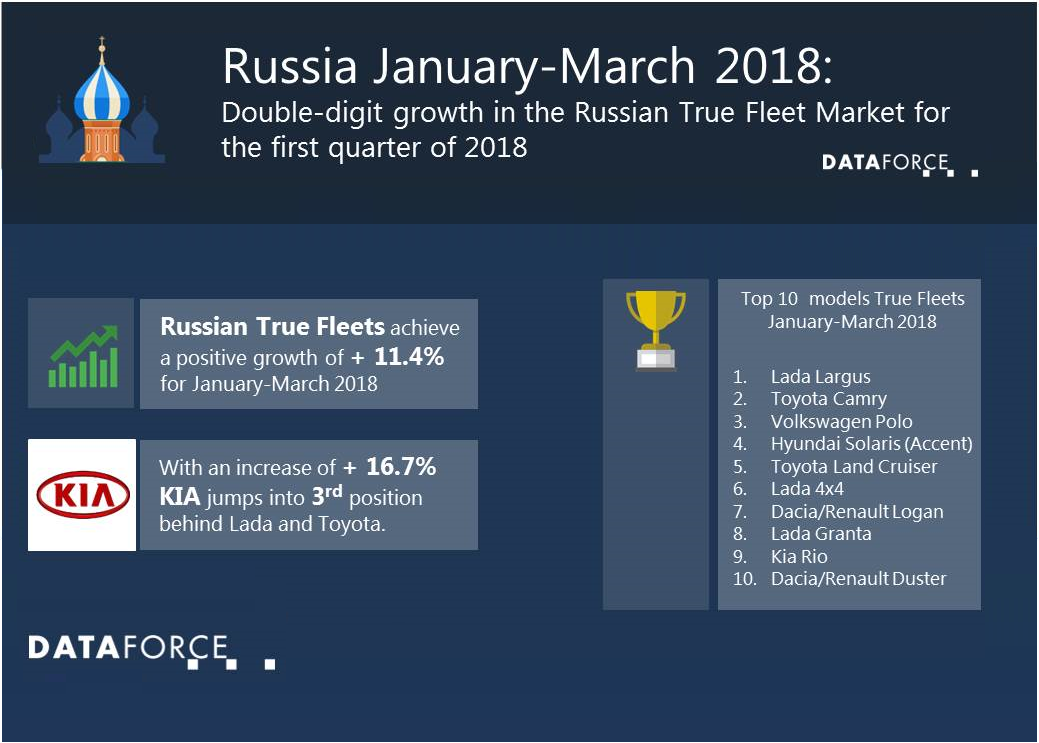 We thought it would make some sense to take a closer look at one of the markets outside the well-known EU-5 region this month and our choice fell to Russia. Following a dramatic decline in 2015/2016 after a bad economic period for the Eurasian nation, new passenger car registrations started to recover in 2017 and the trend for the first quarter of 2018 was extraordinarily positive.

In comparison to the Western European countries the relevance of Special Channels (Short-Term Rentals, Dealerships and Manufacturers) in Russia is significantly lower. With a share of less than 4% these segments with a more tactical character are not established to the same extent as in other countries (yet).

While the year-to-date share of 9.7% for True Fleets is below the Western European average, do not be misled by this apparently low percentage. The Russian Total Market is as big as in Belgium and Poland put together and this brings the fleet sector to 32,000 registrations in Q1 with a lot of potential for further growth.

Lada and Toyota remain in the lead for True Fleet and jointly represent a quarter of the market, though they lost 0.8% and 1.1% of market share respectively when compared to January-March 2017. Kia (3rd, + 16.7%) and Volkswagen (4th) swapped positions followed by Dacia and Hyundai who both achieved a double-digit growth rate for the first three months. The top 10 are completed by the home brand UAZ, Škoda (with a remarkable surplus of + 30.9% and No. 1 by absolute volume growth), Mercedes and BMW.

The ranking of the most popular models in fleets indicates the different preferences between private owners and companies: The two most popular company cars – Lada Largus and Toyota Camry – only rank 13th and 20th respectively in the Private Market, while Volkswagen Polo and Hyundai Accent have a lot of fans in both customer groups. The models on ranks number 5-7 in fleets (Toyota Land Cruiser, Lada 4×4 and Dacia/Renault Logan) don’t even show up in the top 15 for the Private Market.

In Q1, fleet registrations for cars equipped with a Diesel engine grew by 28.9% and the Diesel share was the highest for a first quarter in the Russian Market since we started to source registration figures in Russia back in 2012. However with a 17.7% share the result is still far below any other European country. Even Norway and the Netherlands where Alternative powertrains are very popular, have higher Diesel shares. However the picture is different across brands. OEMs like Land Rover or BMW record a Diesel take rate of 80% and 70% respectively while at the other end of the range you can find makes like Lada, Chevrolet or Mazda who offer nothing but petrol engines. Yet another example that the measure “average” has its limitations and you have to look behind the curtain whenever possible to further understand the individual market place.