Germany’s True Fleet hits a challenging month, while SUV & Hybrid are on the rise 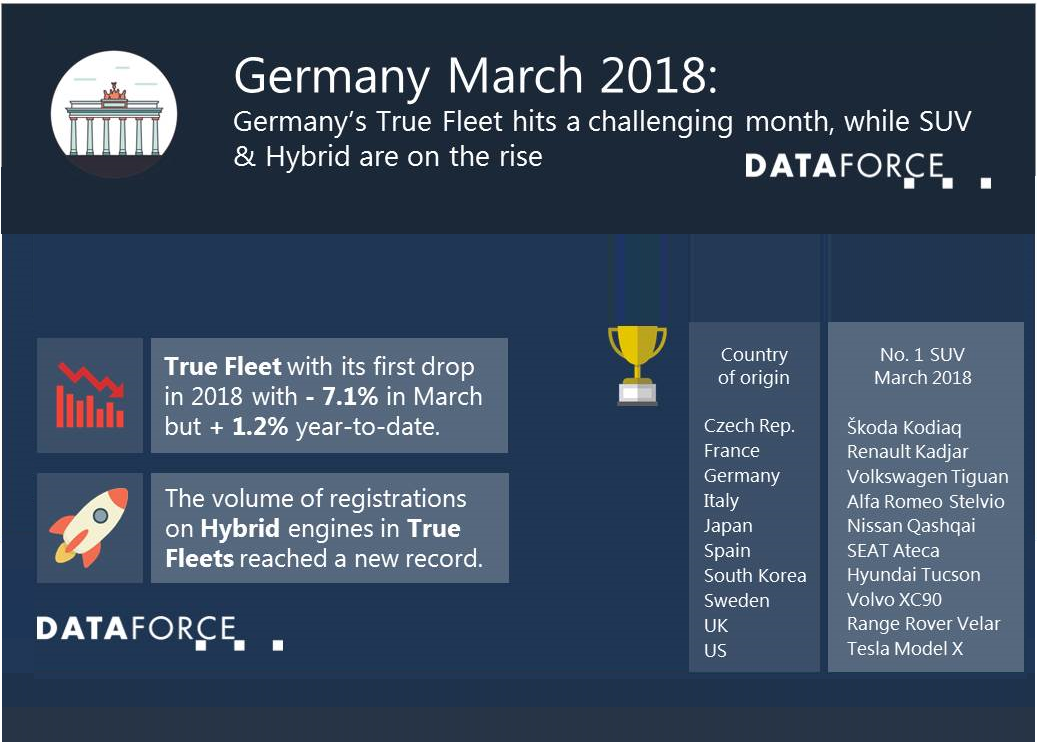 The early start of the Easter holidays in Germany and two missing working days compared to last year’s March combined to produce a negative effect on the German car market. Overall the market was down by 3.4% for new registrations; however a detailed analysis by market channels shows very diverging results. While the Private channel performed really well with a surplus of + 7.6% True Fleets had to report a drop of 7.1% and Special Channels followed with a – 10.6%. All this combined to leave the Total market registrations at around 347,000 down by 3.4% over March 2017.

For the full first quarter of 2018 the registrations on Private customers rocketed with + 16.0% and their share of 37.2% was the highest quarterly result since Q2/2014. Despite the decline in March, True Fleets are still positive with a 1.2% for Q1 and the shift of holidays mentioned above will most probably lead to a better April result than in 2017.

Volkswagen was again leader, slightly expanding its market share. While BMW (2nd) and Audi (3rd) swapped positions, the ranking behind the podium was stable with Mercedes, Ford, Skoda, Opel and Renault. The brand from the Czech Republic alongside Nissan and SEAT, who completed the top 10, were the only ones to increase their registrations.

Outside the top 10, Peugeot (13th, + 17.1%) and Fiat (from rank number 18 to 15 with + 21.4%) were both pretty successful. While the Italian manufacturers’ growth mainly came from the Fiat 500 another significant part was fuelled by the Ducato, especially its Mobile Home version, which is clearly dominating the camper van segment in Germany.

Sometimes one tends to focus solely on OEMs with an outstanding result. But you can of course also find individual models with a remarkable performance from other OEMs where the overall performance is not so great. The Opel Insignia is a good example. While Opel remained in seventh position in the ranking and its volume decline of – 8.8% was pretty much in line with the True Fleet Market’s overall performance, the Insignia showed a very strong result with a + 58.5% in March. This pushed the car from Rüsselsheim into fifth position in the Middle Class segment behind Volkswagen Passat, Audi A4, BMW 3 Series and Mercedes C‑Class. With 9.2% the Insignia scored its second best market share within its segment and you need to go back to July 2009 to find that higher share.

Another interesting performance was achieved by the all new Volkswagen T-Roc, just a few months after its market entry the small newcomer from Wolfsburg has already made its way into the SUV top 10. It is certainly going to be interesting to see just how far the rise of T-Roc will go. The similarly pronounced and platform sharing Karoq from Škoda might well be another potential top 10 player in the near future, ranked number twelve and only 40 registrations shy of the T-Roc it also carries some promise. Of course new models like these help the segment to grow and with a share of 26.1% we can report a new SUV record, yet again.

The trend from the previous months continued with a significant drop for Diesel and a growth for Petrol engines. When looking at the Total Market level, this trend was accelerated by a rising share of Private registrations – in which Diesel powertrains are less popular than what is seen in Fleets.

Back in the True Fleet Channel, Hybrid registrations have increased by + 41.9%, thereby helping the fueltype to its highest absolute volume in the German True Fleet Market ever. Unsurprisingly the most successful Hybrid brand (by absolute figures) in March was Toyota, they were followed by BMW (mainly 2 Series Active Tourer), Mercedes (mainly E-Class) and Volkswagen (predominantly Passat)  who would all like to eventually emulate the Japanese brands compelling Hybrid success.