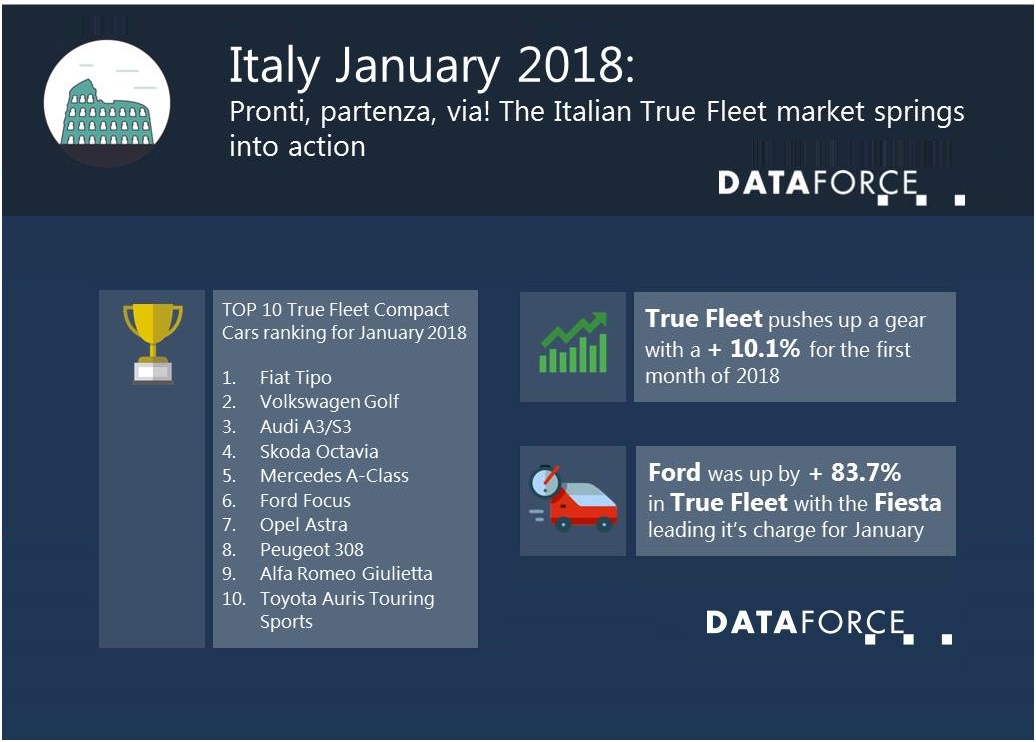 The Italian Fleet market sprung into January with the same verve as seen in 2017, though not every market channel got off the mark quite as well. The Total Market finished a shade under 190,000 registrations or + 3.8% above last January, True Fleet produced double-digits with a + 10.1% but the Private Market dipped with a – 4.7%. No doubt Special Channels were influenced by the drop in the Private Market as these tactical channels went up by 27.6%. It is sure to be an interesting year in the Italian market place.

If January can be seen as the month of good intentions we have some marques putting out the flags early. No change at the top with Fiat ruling the roost, interestingly though one of three brands inside the Top 10 to have a negative month. Ford meanwhile produced a solid growth month of + 83.7% and took out 2nd spot. This growth came from two models, some Kuga but mostly the new version Fiesta and while Small in terms of segment certainly not in volume for January.

The next four positions in order went to the German manufacturers VW, Audi, Mercedes, BMW with the trio mentioned first recording positive results and BMW one of the negative growth manufacturers (alongside Fiat & Peugeot) inside the top 10.

The brand following in line was Jeep (7th) and much like Ford they seem to be making their intentions known registering a + 130.6% over the corresponding January 2017 and it was their new Compass that carried the major volume growth.

Renault (8th) and Alfa Romeo (9th) were both positive but it was Alfa that stood out as the last of the big growth brands, beating Jeep’s growth rate with a + 134.3%. The home grown manufacturer jumped nine places into the 9th position and the model bringing the registrations was the Stelvio, which given its looks and performance, will likely feature highly on the True Fleet SUV volume charts for most of 2018. Peugeot (10th) finished off the top 10 brands for January and while it was a negative growth month the 5008 and 3008 volumes kept the brand within the top 10.

This does actually depend on the segment you are looking at. In True Fleet for 2017 Compact Cars had a record year with the most registrations seen since 2005 while in the Private Market it had contracted over 2016’s volume and was less than half the volume seen in 2005 – also the Private markets record year.

For 2018 the picture may well be something similar looking at the January figures, while Compact Cars in True Fleet took a small hit dropping 2.9%, the punch in Privates amounted to a hefty 19.5%. On the model level the Fiat Tipo, VW Golf and Opel Astra were hit hardest in the Private Market, while in True Fleet the biggest drops came from Peugeot 308, Opel Astra, and Audi A3. With the recent release of the Mercedes A-Class, a new Ford Focus later in the year and also a new Kia c’eed it will be interesting to review the segment once again, later in 2018.