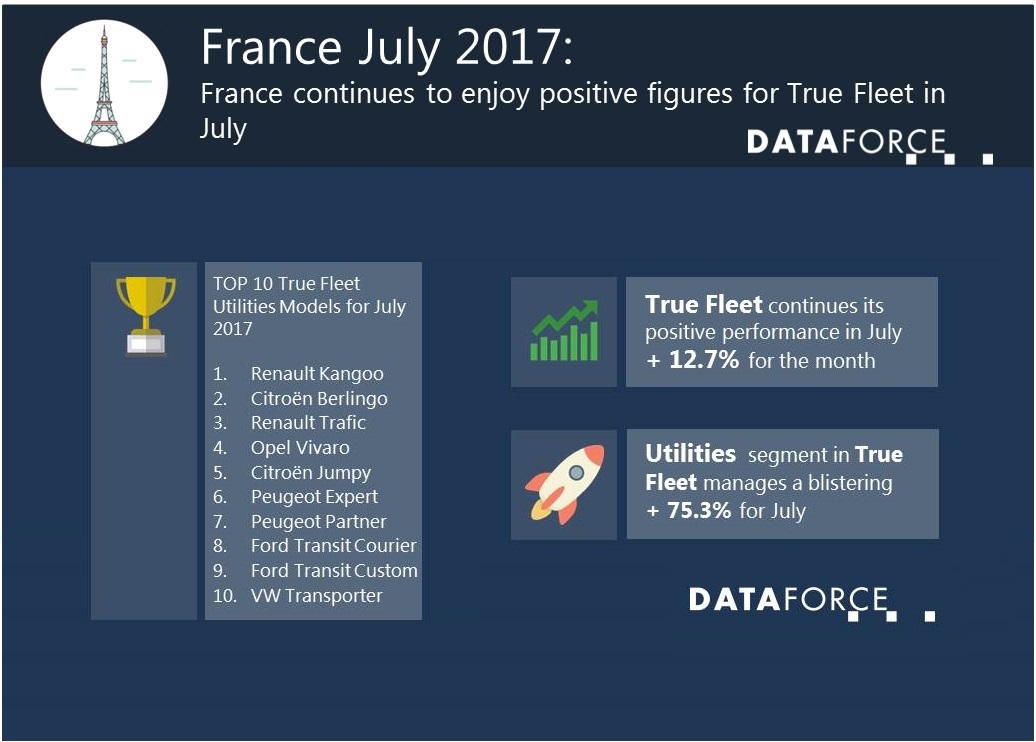 The French True Fleet Market continues its resurgence with a strong growth month for July. Total Market figures were a little over 147,000 for the month or up 10.9%, with all the individual channels playing their role. Private Market missed out on double-figure growth by only 0.1% to end on 9.9%, True Fleet had its third consecutive month of increase achieving a + 12.7%, while Special Channels finished on + 11.7% pushing its year-to-date growth to + 7.8%.

In terms of OEM ranking for the True Fleet Top 10 it was a pretty similar picture as last year with a few manufacturers pirouetting around each other. Peugeot in #1 and Renault in #2 were the first to perform the routine with Peugeot putting in a solid growth of 29.2%. Citroën and VW stood firm in 3rd and 4th with the French manufacturer scoring the second highest growth inside the Top 10 of 42.9%. Next to perform the place swap were Audi in 5th and BMW in 6th, though neither managed to hit positive growth followed by Mercedes stuck firm in 7th who did make a slight gain with + 1.9%. The final three of Ford, Toyota and Nissan had their own moves, Ford managed 8th with a + 37.6% and Toyota (highest growth inside the Top 10) secured 9th with + 44.6%, both of which leapfrogged Nissan pushing the Japanese manufacturer into 10th.

For the French market we took a look into the True Fleet Utilities segment which showed the highest growth rate of all the vehicle segments with a blistering + 75.3% for July. This result pushed the YTD growth to 27.2% and has allowed utilities to become the biggest growth segment in France for 2017 so far. Amazingly 80.7% of the YTD volume growth in the segment comes from just three models, the Renault Kangoo, Citroën Jumpy and Peugeot Expert. Individual honours go to both the Ford Transit Courier and the Opel Vivaro. The Transit Courier had its best month since its release in 2014, while the Vivaro also had it best month but with a slightly longer history, since Dataforce statistics began in 2003.