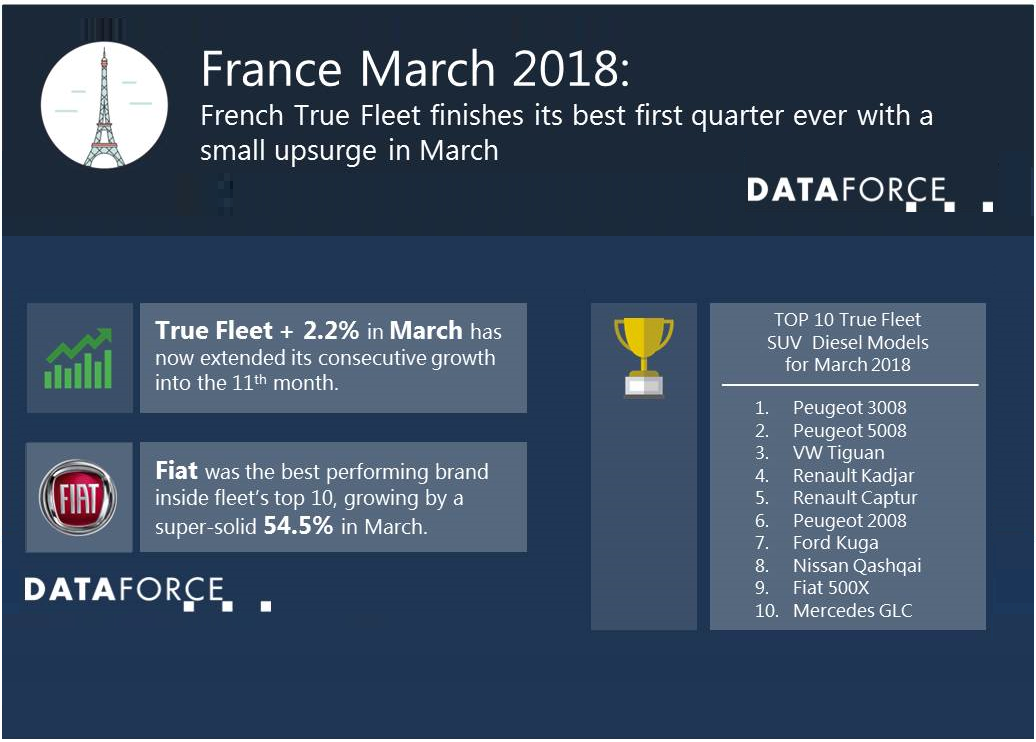 Following on from the growth in recent months, French Total Market’s passenger car registrations increased by 2.2% over March, finishing at around 231,000 units with all market segments participating. The Private Market achieved a + 3.5% while Special Channels eked out + 0.4%. For the True Fleet Market, March was its 11th consecutive month of increasing registrations (+ 2.2%) though it could not keep the pace of the previous months. Taking the full first quarter into consideration, the Private Market was up by 4.5% while True Fleets posted a robust growth of 9.4% and achieved a new record value for a Q1.

Looking at rank 1 to 4 of fleet’s top 10 OEMs, every manufacturer retained its position from the prior year’s ranking. Unsurprisingly, the major French brands finished with all the podium positions, Renault taking the lead followed by Peugeot in 2nd, which achieved a healthy growth of 13.5% due to the usual suspects of the 3008 and 5008. Both of which also took the first two positions in fleet’s SUV ranking. Citroën in 3rd completed the all French podium while Volkswagen finished in 4th.

Further down the ranking, Ford gained two positions jumping into 5th due to a remarkable growth of 34.4%, again the Hybrid version of the Ford Mondeo helped to push their monthly performance. This model currently represents True Fleet’s most appreciated Hybrid model, and when considering all alternative fuel types only Renault’s Zoe could achieve more registrations for March. In addition to the Mondeo, the Fiesta, Focus and Ecosport grew soundly as well.

The German premium brands Audi (6th), Mercedes (7th) and BMW (9th) surrounded Fiat in 8th while Toyota completed the top 10. The Italian manufacturer continued its upswing raising registrations by 54.5% and achieving its highest market share since December 2010 (3.5%). Almost all Fiat models took a share of the growth pie with the 500 increasing by 37.9%, the 500X up by 87.0% and the 500L, Panda and Talento growing by three- or even four-digit rates.

Speaking of the different Mini models of Fiat, the Mini Car segment was up by 46.9% over March, only outperformed by the less relevant Luxury Class (+ 74.8%), and with 8 out of the top 10 models rising very robustly quite a few different OEMs benefitted from this upswing.

And what about the SUV segment? It is still on a steady upward trajectory showing no sign of losing its dynamic momentum, growing by 17.6% over March 2017. As already mentioned Peugeot dominated this month’s SUV ranking, but the Renault Captur is following closely on 3rd. Another noteworthy fact is that the last decline for the overall SUV segment dated back to May 2013. So, a full five years of consecutive growth are in striking distance and with the market introduction of a few new volume models, like the Citroën C3 Aircross, VW T-Roc and Opel Grandland X, this target may be achieved relatively easily.