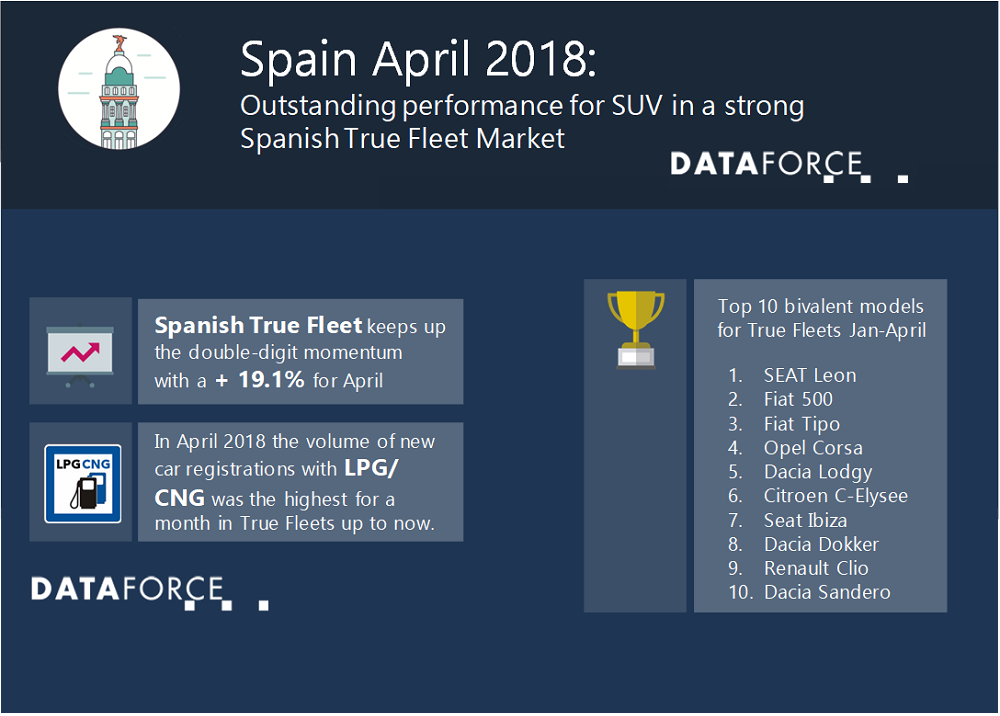 Beyond any doubt the Spanish Passenger Car Market is in very good shape and so it is hardly surprising that the fourth month in 2018 generated the fourth month of growth. The Total Market achieved almost 119,000 registrations for April, this being a + 12.4% in terms of growth, Private and True Fleets both achieved similar volume growths of 20.1% and 19.1% respectively while Special Channels were very consistent to say the least. With 39.878 new car registrations on Short-Term Rentals, Dealerships and Manufacturer the volume of April 2017 was outmatched by exactly 1 unit!

Eight out of Top 10 brands in True Fleets achieved double-digit growth rates and this created a lot of movement in the ranking. Thanks to very good performances of Polo, Tiguan and additional contributions from the all new T-Roc, Volkswagen regained the lead from Renault while Peugeot stayed in third position.

Audi jumped from rank number eight into fourth position securing themselves the highest growth inside the top 10 with a remarkable + 35.2%. This performance was mainly fuelled by the SUV models Q3 and Q5. Toyota stayed 5th with a + 23.2% strongly supported by the Prius Plus which thanks to many taxi registrations more than doubled its volume over April 2017. Mercedes ranked 6th followed by BMW (the only brand to suffer a drop compared to last year’s April), SEAT and Opel while Nissan completed the top 10. Nevertheless, we found noteworthy performances outside this ranking where Fiat (rank number 13, + 100.3%) and Kia (rank number 15, + 72.3%) were shining with stellar growth rates.

With a share of 40.6% SUV scored yet another record in the Spanish True Fleet Market. A truly impressive result allowing a lot of car manufacturers to participate, this impressively demonstrated by the fact that you can find models of no less than nine different OEMs in the top 10 of SUV.

Furthermore, the rise is spread evenly across the country. While you might have expected a share of close to 50% or beyond in the regions close to the Pyrenees (like Gerona or Huesca) the demand for SUVs is actually pretty similar in Metropolitan areas such as Barcelona, Valencia and Sevilla with a share from 41% to 45% and even Madrid is not far behind with 38.0%.

In fact, there is only one region where SUV are not No 1 and that is Ceuta. As you will certainly know Ceuta is a Spanish autonomous city on the north coast of Africa, separated from the Spanish mainland by the Strait of Gibraltar. No reason for a serious concern as we are talking about a Total market of 64 cars with a mere 5 True Fleet registrations in April there.

Following a constant decline over 2016 and 2017 it now seems that the drop for Diesel has eventually stopped. Diesel registrations made up for 63.2% of April’s fleet registrations and thus have reached a share that was slightly higher than both in February (62.3%) and March (62.4%) 2018.

Another remarkable result can be reported for one of the Alternative fuel types: With 1.9% the share of bivalent (LPG/CNG + Petrol) was the second highest ever and the best in terms of volume in the Spanish True Fleet Market up to now. The figures are still far below the ones in Italy (which is clearly the strongest European Market in terms of bivalent fuel) but it will be interesting to keep an eye on this trend in the upcoming months.