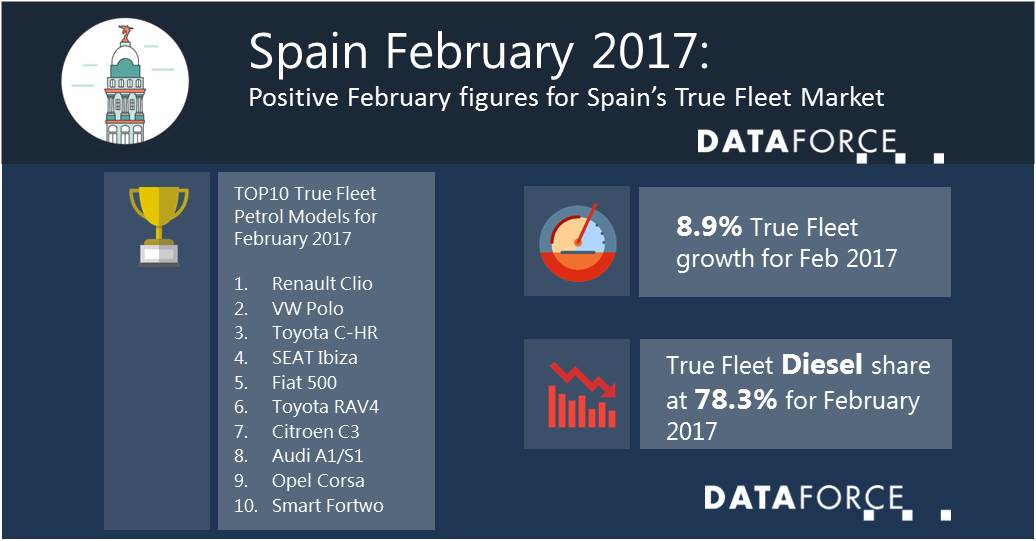 Spain has continued with positive numbers for February 2017. The passenger car Total market managed 102,000 registrations which produced a 1.6% growth for the month on month comparison and as we looked into the market segmentation it was True Fleet showing the best growth rate.

True Fleet delivered + 8.9% and inside the Top 10 Manufacturers there were some good results from Renault, BMW and Opel. Renault pushed into 2nd place achieving a + 38.3%, helped by good results from the Clio and Megane. BMW jumped 3 places into 5th with 15.5% growth expansion which was powered predominantly by the X1 and Opel entered the Top 10 in 10th showing a 26.1% increase with the Astra and Mokka as the biggest contributors.

Looking deeper into True Fleet with a focus on fuel type we have seen some interesting activity. Since 2013 we have seen a reasonably steady volume increase for True Fleet with diesel the #1 fuel type of choice. This does however mask somewhat the steady drop of market share from a high of 86.0% to a low in December 2016 of 77.6%. Obviously we have seen increases from alternative fuels as more manufacturers enter the space but it is the petrol share that is growing fastest. As we added vehicle segment to the analysis it was surprising to see that SUV is growing into one of the biggest contributors and not the obvious choice of Mini, Small and Compact Cars with them being smaller, lighter and perhaps offering the best size vehicles for maximum fuel economy.

SUV has claimed its highest share of the True Fleet petrol market for February with 29.2% only beaten by Small Cars with 34.0%. However there is a diverse range of segments represented in the Top 10 models for petrol. Small cars had the majority with six entries and took the top spot with the Renault Clio jumping 20 places into 1st.  SUV was represented by 2 different models (3rd and 6th) from the same manufacturer, Toyota with the CH-R and RAV4. Finally the Mini segment filled 2 places (5th and 10th) with the Fiat 500 and Smart Fortwo.