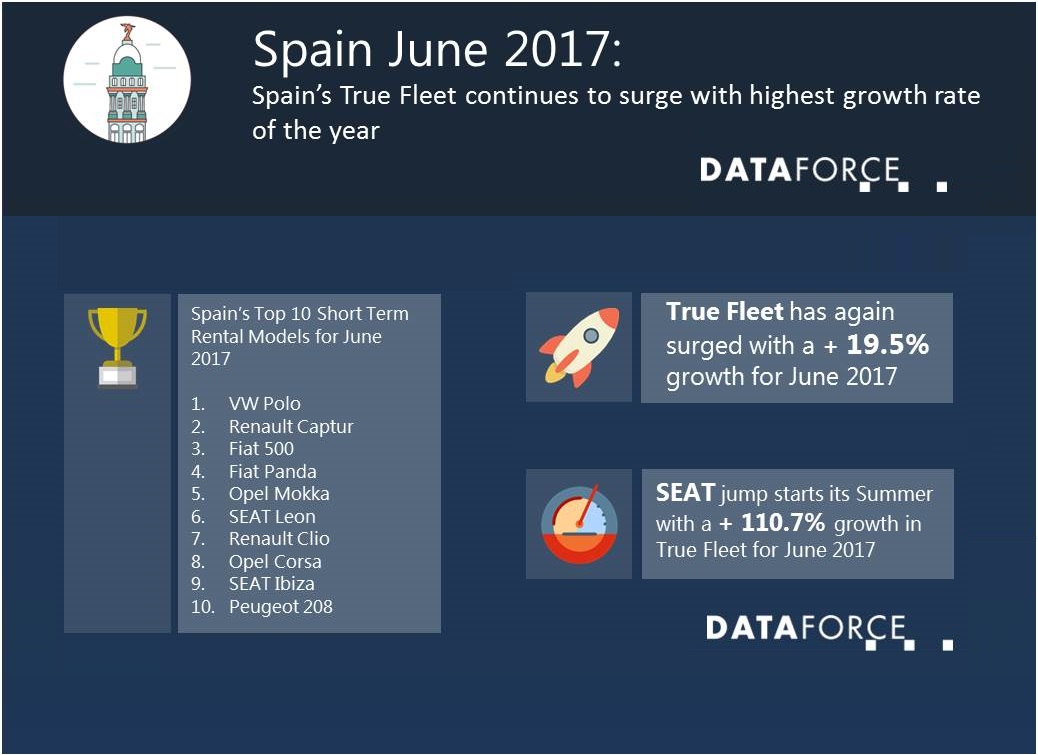 The Spanish Fleet Market can seemingly do no wrong with yet another double-digit growth, this time a + 19.5%, the highest growth rate for the year so far. The Total Market achieved 137,000 registrations with all channels bettering their volume of June 2016. The Private Market grew by 3.6%, Special Channels by 4.9% with True Fleet taking the crown in terms of the highest growth. As an interesting sub note, True Fleet also scored the highest absolute volume growth of the three channels in June.

Inside True Fleet’s Top 10 there was positive growth for all but one of the marques with one achieving a dramatic + 110.7%. Renault retained their position topping the fleet chart closely followed by VW but it was SEAT jumping into 3rd from 9th that really excelled. Achieving the highest growth rate from the Top 25 brands with a + 110.7% it outshone most of the competition and while both the Leon and Ateca registered good volumes and an increase over last June’s figures it was the Ibiza that really drove this surge. Much like its namesake island, the Ibiza launched it summer in June with almost 1,000 units over last year’s month-on-month comparison on its way to earning 55.2% of SEAT’s monthly volume.

Peugeot in 4th, Audi in 5th and BMW in 6th followed in the ranking, Ford and Mercedes were next with both retaining the same positions as in June 2016. Nissan delivered the next highest rank surge with a three place gain securing 9th on the back of a + 37.4% growth while Citroen rounded out the Top 10.

With June the first month of summer and SEAT’s Ibiza performing well in True Fleet we though It may be good to focus some attention on the Short Term Rental (STR) channel of the Canary Islands and Balearics. It was impressive to see that this collection of islands accounted for 17.0% of all Spain’s rental registrations for June.

The Top 3 vehicle segments were Small, Compact and SUV, making up 84.2% of the STR volume, and it was one manufacturer that took out all three of the those segments top spots, Opel. With Corsa almost twice the volume of the VW Polo in the Small Segment, Astra more than twice the volume of the SEAT Leon in Compact and Mokka beating the Citroen C4 Cactus it seems that there is a good chance that your holiday rental may well be an Opel.