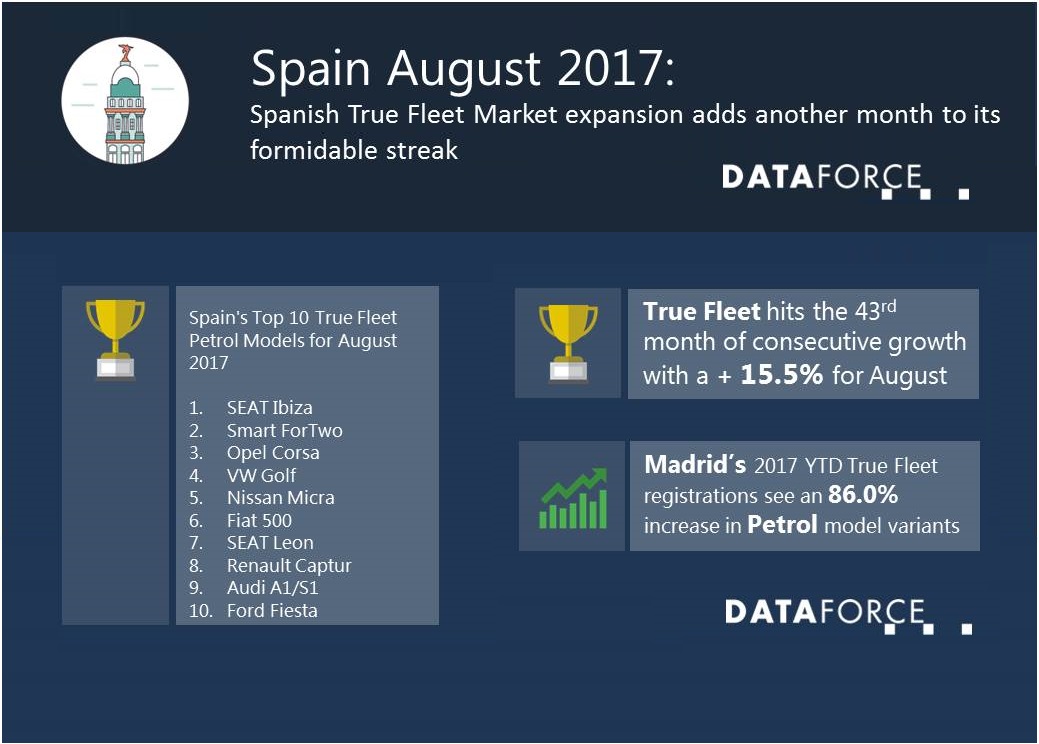 The Spanish fleet market can seemingly do no wrong and has now added another month of positive results, marking the 43rd month of consecutive growth for True Fleet. The streak continued with the healthy growth rate of 15.5% with stellar performances from 4 brands inside the Top 10 including the home grown manufacturer SEAT.

The Total Market finished just 6 registrations shy of 76,000 which equated to a growth of 13.9% for the month of August, while the Private Market saw a solid performance growing by 9.2% in their month-on-month comparison. Special Channels showed a + 35.1% with Short-Term Rental making up 30.6% of the total monthly volume.

Inside the Top 10 we saw plenty of movement from the OEMs with only two brands able to keep last year’s respective rankings. We decided to list each brands ranking alongside their top fleet vehicle for the month. It was VW once again top of the tree and the first to retain last year’s position with the ubiquitous Golf leading their charge. Renault in 2nd pushed themselves up a place with the Clio their volume vehicle of the month.  More German manufacturers took the next 3 places, starting with Audi on 3rd position with the Q5 showing as their popular choice. BMW in 4th also lead with an SUV namely the X1 and Mercedes in 5th who seemingly not wanted to break with the SUV trend had the GLC as their highest volume model.

Peugeot in 6th was the second manufacturer that retained their place with the 308 their #1. Both Toyota and Seat surged 3 places to 7th and 8th respectively with the RAV4 and Leon their most registered. Ford in 9th had the Kuga take #1 and the recently acquired Opel finished in 10th with a little help from the Corsa.

Our final insight looks into the year-to-date (YTD) True Fleet registrations by fueltype for the two largest cities in Spain, Madrid and Barcelona. Starting with the capital Madrid, we see the first contrast in the growth coming from petrol. While this fueltype is growing in both cities it is Madrid that is currently seeing the biggest surge with almost double the growth rate of Barcelona. Barcelona shows an extremely healthy growth of 44.1% while Madrid is currently at 86.0% for 2017 so far. The same can be seen in the alternative fueltypes, though is somewhat less pronounced. Barcelona has currently increased by 70.5% but it is again Madrid with + 83.1% that has seen the bigger upswing. Diesel in Spain is also into positive growth and both cities coincidently achieved the same growth of 3.1% for the YTD.