Spanish True Fleet records a full year of growth for 2017 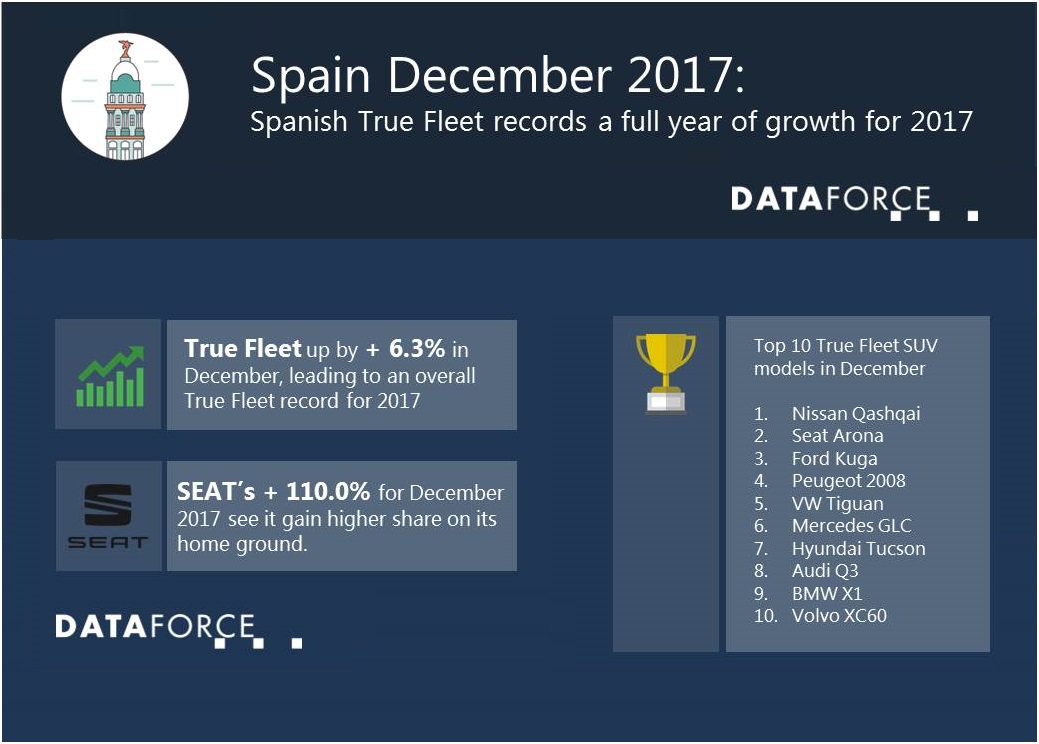 The Spanish True Fleet Market seems to be unstoppable on its upward trajectory. With a healthy growth of 6.3% in December, the market surpassed each of last year’s corresponding months with expansion adding up to a buoyant 12.5% rise for 2017. Year-to-date (YTD) December also was the highest number of registrations since we started recording True Fleet only figures in Spain back in 2008. Other segments were also in good shape with the Private Market increasing by 7.3% while Special Channels also remained in the black (+ 3.2%). All this combined to lift Total Market’s growth towards 6.2%, finishing with almost 108,000 registrations.

Looking inside the fleet Top 10, the first three brands all retained their positions in December 2017 with Renault in the lead followed by Volkswagen and Peugeot. Audi in 4th gained two positions after increasing their fleet registrations by robust double-digit growth rates. The Ingolstadt-based brand’s performance was lifted by the new Q2 and the Q3 models as well as extraordinary growth rates from the A1 and A5.

December’s biggest gain came from its growth star SEAT jumping from 13th into 5th in the rankings by more than doubling its registrations (+ 110.0%). As you may guess, it was the Arona fuelling December’s surge, but the Ibiza and Leon made additional contributions to push up registrations for the Spanish brand. This monthly performance helped to push SEAT’s True Fleet share to 6.2% for 2017, a gain of 1.2 percentage points over 2016.

Furthermore, we identified some remarkable performances from brands not (yet) in the Top 10. Fiat showed some sound growth (78.2%), but in terms of percentage growth it was outpaced by Kia (+ 103.6%) and its FCA affiliate Alfa Romeo (+ 156.1%).

SUVs all over again

Just like the overall True Fleet segment, SUVs also continue on their upswing. For YTD December, SUVs achieved their highest fleet market share and their monthly growth rate of 21.6% was the highest among all vehicle segments. As already mentioned, the recently introduced smaller models especially revved up the monthly growth of several OEMs. Looking into the details, the Nissan Qashqai took the crown, followed by the Seat Arona already in 2nd – raising the question as to whether the Arona can usurp  the recently facelifted Qashqai that has been dominating the Spanish SUV registrations since 2010 – the Ford Kuga completed this month’s podium.

In addition, outside the Top 3 we found six models achieving robust triple-digit growth rates compared to prior year’s month: Mini Countryman, Kia Niro, Fiat 500X, Audi Q2, Toyota C-HR and Ford Ecosport. Due to the recent market start of several models and further upcoming ones, this boom will foreseeably continue, especially in the short term.