True Fleet in Spain notches up yet another positive month 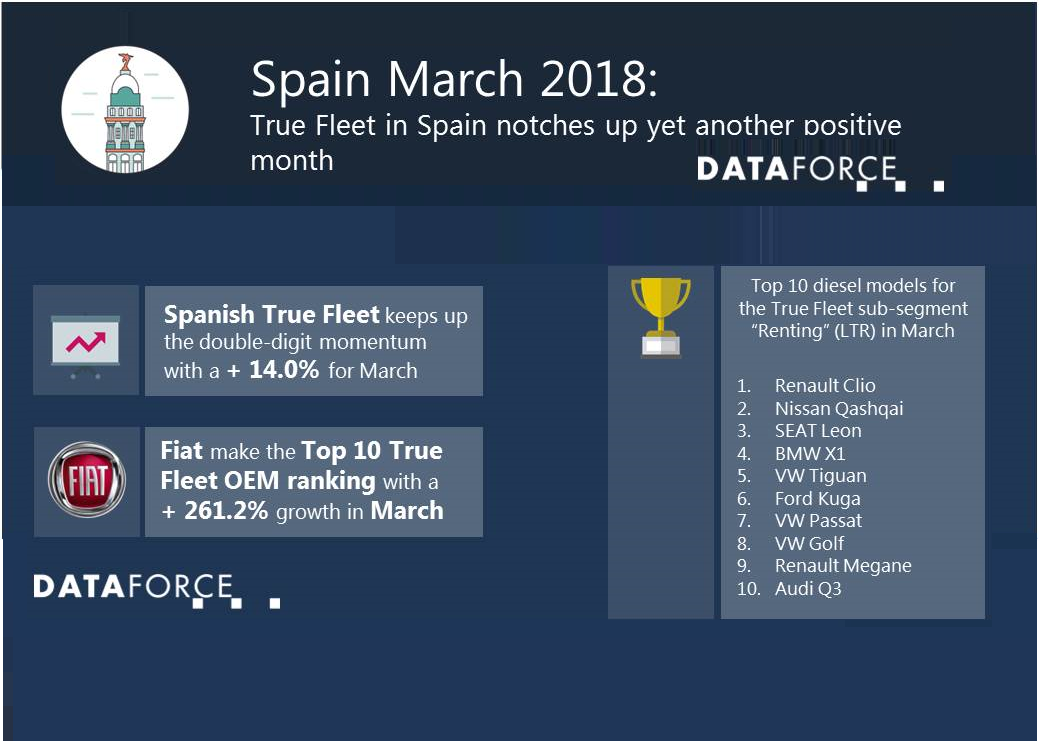 So with the Spanish economy moving along nicely it seems that the True Fleet Market has set the cruise control and is firmly on its way to another impressive year. The Total Market managed 133,000 registrations for the month, this being a + 2.0% in terms of growth, Special Channels were up by 3.7% while the Private market took it first negative month since July 2017 with a – 4.1%. This leaves True Fleet, which continues to keep up its 2018 trend of double-digit growth with an impressive + 14.0% and closes out a very successful Q1.

So with a buoyant market place and market share to be won or lost the top 10 brands each appear to be jostling for position, so much so that only two OEMs retained their places in March. VW retook the #1 spot for March while Renault took 2nd and interestingly while VW had a surplus of 306 registrations, Renault was down by almost the same with – 307 registrations, perhaps it was a shame that Peugeot was not up by 308.

While Audi could not retain its stellar 1st position from February, it did produce a + 42.1% moving from 7th to 3rd in the month-on-month comparison. Nissan in 4th was one of the non-movers while Peugeot in 5th and BMW in 6th swapped places from last March rankings. Fiat in 7th scored the highest growth inside the top 10 with a superb + 261.2% and is obviously looking to capitalise on Spanish growth with the 500 Model almost the sole driver registering 81.9% of the brand’s True Fleet registrations. Coincidently this was Fiat’s first month inside the OEM top 10 in Spain since November 2008!

Citroën was another new entry into the top 10 moving from 11th to 8th off the back of a respectable + 28.8% , while Ford (9th) didn’t fare as well dropping down 6 places. Home grown manufacturer SEAT (10th) was the last non-mover and rounded out the ranking.

LTR – From the diesel prospective

For our final piece we wanted to give a view inside the long-term rental channel (LTR) for the Spanish market from a diesel prospective. While most sub-segments of True Fleet are currently showing a heavy shift away from diesel engines the LTR or “Renting” channel is somewhat riding out the storm showing a drop of only 1.8% YTD (year-to-date). So while the channel is growing, diesel remains on an even keel. Audi appears to be the manufacturer who’s volume is currently reaping the most benefit with a YTD increase of 57.2% but further down the ranking both Hyundai (+ 80.3%) and Skoda (+ 100.0%) are also benefitting, though at smaller volumes than the manufacturer from Ingolstadt.