True Fleet in the UK continues to look for its equilibrium 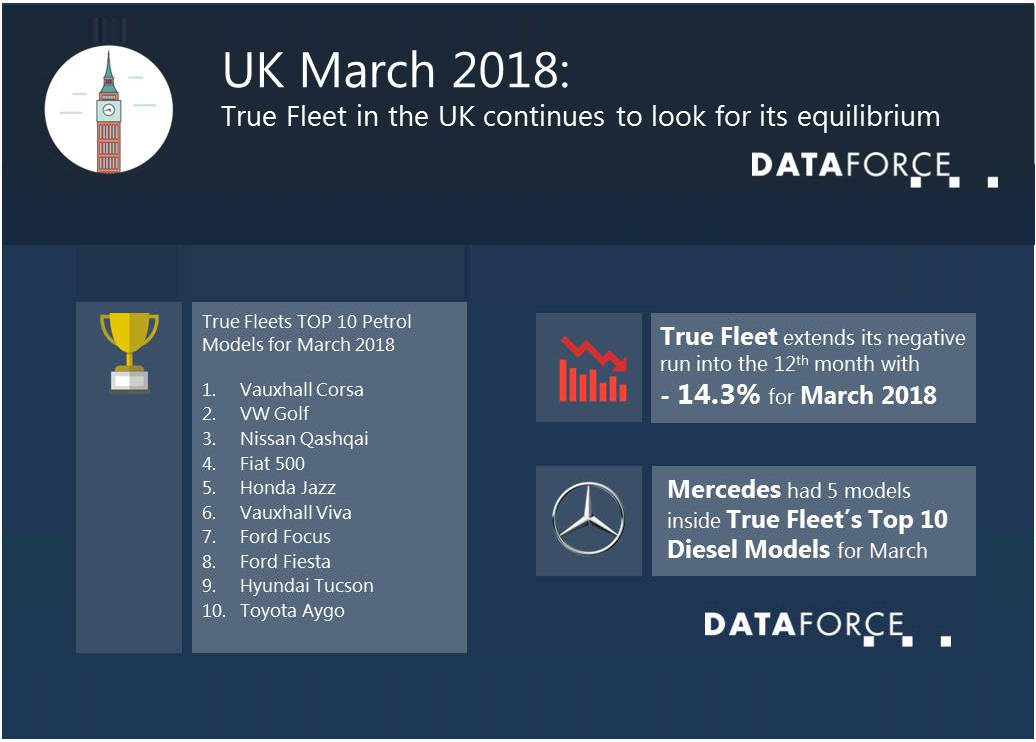 The difficult circumstances continue for the UK True Fleet market, with its now 12th month of decline. The hope that the new plate release would perhaps help to alleviate this trend was short lived, Brexit and the upcoming changes to the VED weighed heavily and the cycle of negative growth remains un-broken. Total Market registrations for March finished just north of 474,000 down by 15.7% with all sub channels sharing the negativity, even Dealerships and Manufacturers! In terms of both volume and percentage of negative growth the Private market took both accolades with a – 16.5% in the growth stakes, Special Channels was the next highest negative with a – 15.9% leaving True Fleet with the lowest of the unfavourable results on – 14.3%.

Vauxhall (Opel) has taken the #1 spot for March for the fourth year in a row though perhaps by default as their losses were smaller than that of their constant rival Ford (3rd). It was Nissan (7th) though that was hardest hit in March falling four places. VW (2nd) had a positive month, scoring the highest growth rate inside the Top 10 with a + 14.9%. The other German manufacturers of Mercedes, Audi and BMW ranked in at 4th, 5th and 6th respectively with only Audi able to boast favourable result with + 0.4%.

Toyota retained their 8th position from March 2017 while Kia in 9th pipped their sister company Hyundai (10th) with a + 5.6%. Kia’s result was underpinned by the Sportage, though it was a negative month for the SUV leaving this month accolades to the cee’d, Stonic and Niro, the latter of which is perhaps benefitting from the upcoming VED tax hike hitting diesel pretty hard.

No prizes for guessing which fuel types are up or down but a deeper look into models from True Fleet brought up some surprising winners and embattled losers on the petrol and diesel front. On a whole, petrol was up by 11.4% while diesel took a heavy shot losing 37.1% (that’s a five digit drop compared to 2017).

From the Petrol range: In March we saw the facelifted Honda Jazz jump a full sixteen places into 4th with a + 151.9%. The VW Golf moved from 14th to 2nd place with a + 157.2% but it was certainly the Hyundai Tucson which outshone all other models racking up a + 860.9% with a four digit volume increase! Hardest hit? The Vauxhall Corsa which while retaining its #1 spot dropped by 30.8% and Ford’s Fiesta (8th) also dropped by 58.2%.

Form the Diesel range: In truth Mercedes dominates the diesel model range in terms of entries with no fewer than 5 positions inside the top 10, Wow! However within the 5 models we also see the top 10s highest winners and losers in terms of growth. GLA (10th from 46th) was highest grower with a + 98.7% and GLC (7th from 36th) was not far behind with + 78.7%. Losers were the A-, C- and E-Class with anything but an ace performance for March down by 52.6%, 37.5% and 34.0% respectively. Other positives came from the Ford Kuga (2nd) with a + 6.9% and the VW Golf (1st) which managed to secure a positive result with just 1 extra registration over last March and with the Kuga a mere 28 registrations behind it was a close run for the #1 ranking.