Vamos! Spanish True Fleet Market with a brilliant start of the year 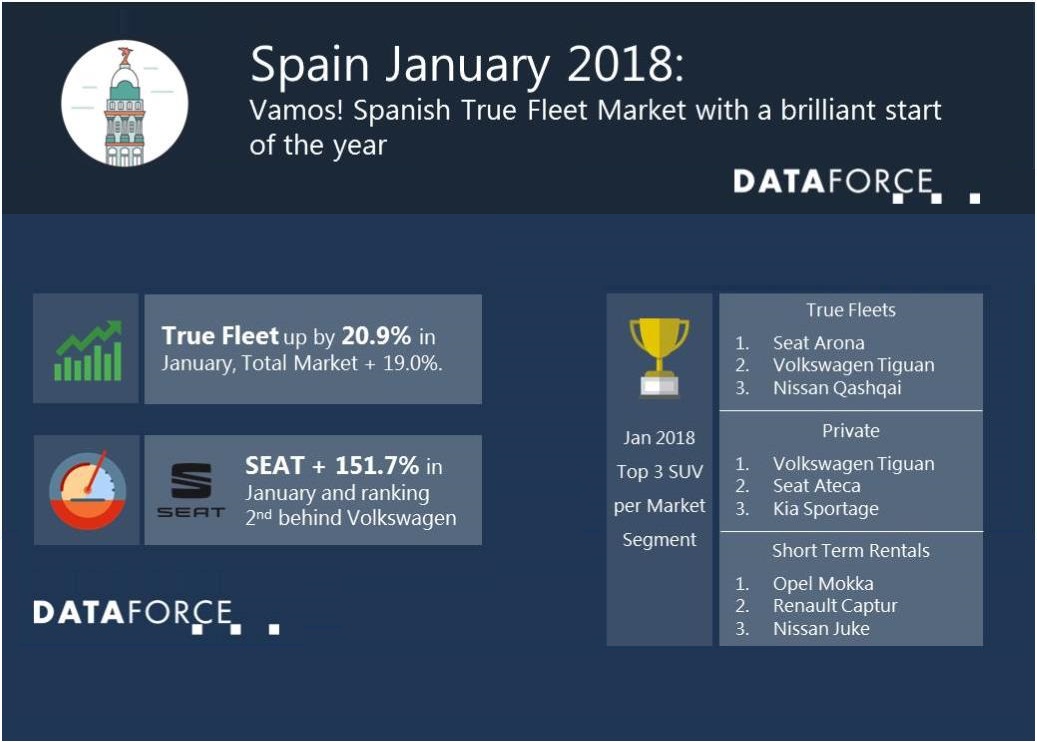 No doubt: the Spanish passenger car market had a very promising start in 2018. With almost 106,000 new registrations it was the highest January volume since 2007. The registrations in the Private Market increased by + 15.5% over January 2017 but the rise was even bigger for True Fleets: a plus of 20.9% was the highest monthly percentage growth since November 2016. Despite the good result for both Private and True Fleets the volume in the more tactically driven Special Channels also rose significantly (+ 24.9%).

Volkswagen had a successful January with strong performances of the models Tiguan and Golf, additionally supported by registrations of the all-new small SUV T-Roc. This helped Volkswagen to recapture the lead in the ranking from Renault. The French brand dropped back to 7th position after being number one in October, November and December 2017.

SEAT scored a remarkable result in January and jumped from 11th position into rank number two with a growth of 151.7%. The manufacturer from Martorell achieved a market share of 8.8%, its best in almost three years (February 2015). While the registrations of the Compact SUV Ateca increased by + 23.7% the Ibiza and the Leon both more than doubled their volumes. The new small SUV Arona also contributed significantly and was already number four in the model ranking in True Fleets behind Volkswagen Golf, SEAT Ibiza and Leon which underlines SEAT’s success in its home (fleet) market.

Toyota did also very well and climbed into fifth position behind Audi and Peugeot with a + 51.4% followed by Mercedes, Renault, BMW, Ford and Opel.

Outside the top 10 Škoda was shining in the first month of this year. The Czech manufacturer doubled its registrations (+ 104.2%) and pushed its market share to three percent for the first time since August 2015. Nowadays it is almost a bit unusual that this increase was not only triggered by SUV models. Beside Fabia and Octavia especially the Superb performed exceptionally well and even ranked number two in the Middle Class segment behind Volkswagen Passat!

The new SEAT Arona helped the SUV segment to score a new record share with almost 40% (39.7%) of the True Fleet Market. The popularity of SUVs in Spain is not only higher than in all other big European Markets but also based on many pillars. Only the Mercedes GLC (ranking 5th) achieved exactly the same number of registration as twelve months ago while all other models within the top 30 SUV in January had growing numbers compared to January 2017. The ranking of the top sellers shows five different brands on ranks 1–5, namely SEAT Arona, Volkswagen Tiguan, Nissan Qashqai, Audi Q3 and Mercedes GLC. And as you can see in our infographic the ranking looks pretty different depending on the market channel you are looking at.

As in many other markets the ongoing success of the Sports Utility Vehicles puts pressure on other groups of vehicles. The same applies for Spain where the Van Segment declined by – 24.0% in a growing market. In January, Vans accounted for only 5.5% of all True Fleet registrations which is the lowest percentage we ever recorded for Spain. Since 2013 the share declined by 50% while the share of SUV almost doubled. The market structure is obviously changing dramatically!