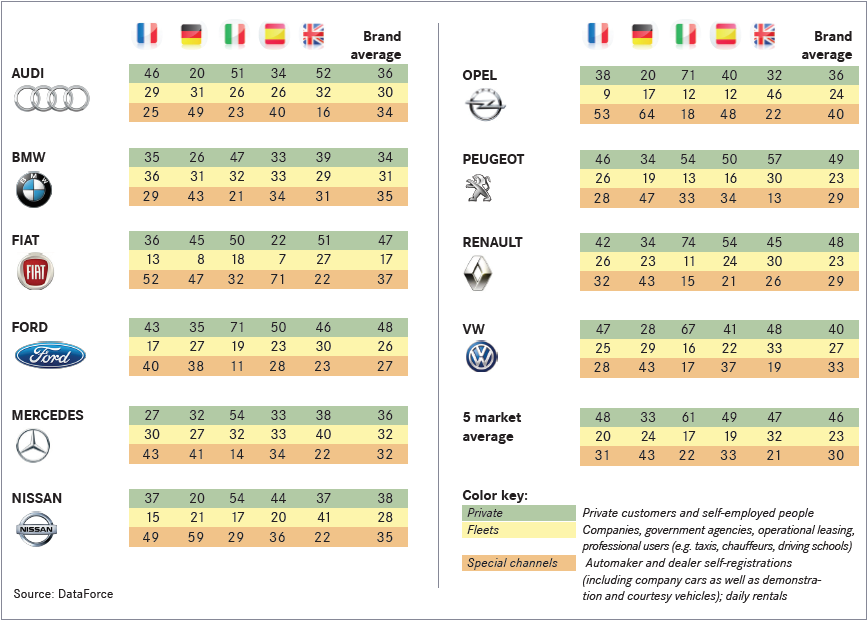 The Peugeot, Ford and Renault brands were Europe’s firstquarter leaders in a key part of the retail business: sales to private customers. In most cases, these sales provide a higher profit margin to the automaker than those from fleets or special channels, automaker sources say.

In the first quarter, 49 percent of Peugeot’s buyers in Europe’s five largest markets (Germany, the UK, France, Italy and Spain) were private customers, with a peak of 57 percent for its UK sales. Renault and Ford tied for second place as both sold 48 percent of their vehicles during the quarter to private customers. The two brands had their peak performance in Italy (see table, right), with private sales of more than 70 percent for each. Fiat ranked fourth with 47 percent of its sales from private buyers and Volkswagen brand rounded out the top five at 40 percent.

Due largely to a tax that discourages fleet sales, Italy had the highest penetration of private sales in Europe’s largest markets (61 percent) followed by Spain (49 percent), France (48 percent), the UK (47 percent) and Germany (33 percent).

Germany-based market researcher Dataforce calculates the figures, which will appear quarterly in Automotive News Europe starting this month. Only the top 10 brands based on European sales appear in the table.

Premium brands, on average, sell fewer vehicles to private buyers than volume brands because they are more focused on fleets, such as company cars for large businesses. The third option, special channels, is considered to be the least lucrative.

The different levels of profitability generated from the various sales channels is a well-kept industry secret. Seat President Luca de Meo, however, recently gave Automotive News Europe some additional insight into this area of the business.

De Meo said private sales are crucial to a volume brand’s profitability but “true fleet sales to midsize companies deliver similar margins when you also include aftermarket revenues, which are higher with fleet customers.”

De Meo also confirmed that special channels, which mainly include self-registrations, are the least profitable. “Special channels are breakeven at best for automakers,” he said.

At 43 percent, Germany had the highest percentage of special channel sales among Europe’s largest markets. One explanation is that Germany is Europe’s largest market and serves as a competitiveness benchmark. Therefore, when a national sales company cannot find enough private buyers in Germany, it is forced to use low-margin self-registrations to artificially inflate its sales to give the appearance of maintaining strong volume.

Companies that do this regularly usually struggle to make a profit. In the first quarter, Opel had the highest percentage of special channel sales in Germany (64 percent) followed by Nissan (59 percent).”