CO2 YTD results: Will the True Fleet Market save the day?

Dataforce has analysed the development of average CO2 emissions between January and October 2020 for 5 brands and in 10 different countries, focusing on the relevant fleet and private markets. Tactical channels such as manufacturer, dealer and RAC are left out.

For most of the considered brands, average CO2 emissions in the fleet market are significantly lower than in the private market. Thus, the fleet market contributes to the manufacturers achieving their CO2 targets. VW is the exception, as their models e-Golf and e-Up are more frequently chosen by private buyers. Furthermore, the analysis highlights the importance of Supercredits, i.e. counting BEVs and PHEVs twice. The difference between the calculations with and without this instrument makes up for a CO2 reduction between 9 and 18 grams.

In line with the higher EV purchase incentives in various countries, CO2 emissions decreased from the third quarter. April 2020 spiked downwards when the new registrations on many larger markets were suffering under the tough lockdown conditions while registrations continued in Norway with a market share of roughly 70 percent of BEVs and PHEVs.

Due to higher registrations of the e-Golf and a stable number of registrations for the e-Up, VW has reduced average CO2 emissions in the private market from 110 g/km at the beginning of the year down to 105 g/km in August 2020. However, in the fleet market there was no significant change until July 2020. From this point increasing numbers of e-Golf and Passat GTE registrations brought down CO2 emissions. 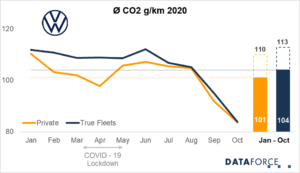 VW made a big leap forward with the launch of id.3 in September. The average CO2 emission is currently 84 g/km in both market segments. Since its launch, the id.3 became a bestseller in Norway and other countries. 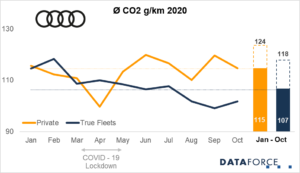 CO2 emissions declined in both the fleet and the private market. Particularly from September, registrations of the i3, X5 PHEV and 3 Series PHEV models were rising sharply. However, the positive effects became visible only from October as September also had an increase in non-electrified vehicles. In absolute figures the average CO2 emissions in fleet are significantly lower than in private cars, as almost three times more electrified vehicles were registered in fleet. 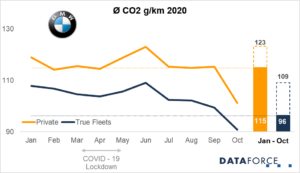 The development of CO2 emissions at Kia was similar to that of BMW. Again, more electrified vehicles were registered in fleet. The lion’s share of these, almost 73 percent, is made up by the Niro. However, since the brand’s private market registrations are almost three times as large as their fleet regs, the average CO2 emissions significantly exceeds the fleet average of 76 g/km CO2. 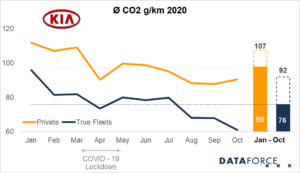 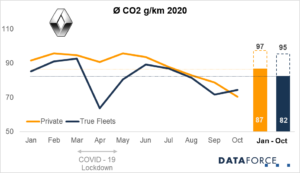 April stands out with particularly low CO2 in fleets. Here, more than 360 Zoe electric and only 16 non-electrified passenger cars were registered in Italy during the lockdown. As a result, the average CO2 emissions across the ten countries fell to just 64 g/km.