Testing the Automotive market for Corona – Positive, negative or both?

There is no doubt that COVID-19 has affected the EU5 automotive marketplace in 2020. Delivering both negative and positive results and firsts for the industry but has the Covid-19 pandemic just advanced established trends or help shift the automotive paradigm to new way?

Dataforce has analysed 2020 using the most updated registrations and forecast to give the end of year result for the EU5.

The EU5 is likely to finish with a loss of around 26% on a total passenger car market scale with none of the market segments bypassing the downward trend. Most heavily effected has been the RAC or Short-term Rental market, understandable so giving the restrictions on both business and leisure travel, and we see that registrations will likely end down around 45%.

The least effected channel has been the True Fleet market contracting by (only) 20%, perhaps its saving grace coming from the fact that the lifecycle of the lease cars are somewhat keeping to the schedule, though some are likely to have been extended and the uptake of new contracts would not have been insulated from the overall market effect.

The Private market will likely finish down around 21% and while this is certainly better news than either the RAC or Dealer & Manufacturers registrations in terms of percentage loss it will be the hardest hit in volume down by around one million registrations and the biggest blow to OEMs bottom lines.

Dealer & Manufacturer’s registrations will likely finish somewhere around 33-34% down on 2019 and while this could be seen slightly positive, given the tactical nature of the channel, we must not forget these alongside RAC, are the feeder streams for the young used car market which has seen an uplift.

2020 a year of Contraction and Capitalisation – Powering Brands

It is unlikely that any OEM could have envisaged the upcoming problems that Corona would inflict on the markets at this time last year, but both BEVs and PHEVs have boomed during the crisis. Plenty of markets increased or placed favourable schemes for the registration of these cars but the question might remain that without the lockdowns would the boom have been even bigger?

BEVs should finish up by around 110-120% over 2019 while PHEVs rose by 190-200% and these registration increases would have helped most manufacturers that had these powertrain models to cushion the blow brought on by the pandemic. Brands with significant positive numbers overall for 2020 are few and far between but EV-only manufacturers Tesla and Polestar and mixed powertrain OEMs MG and Cupra should all finish with positive numbers; however, all the rest have contracted by varying degrees.

Looking deeper into the numbers and higher volume manufactures it is quite clear to see the impact the alternative fuel powertrains have in helping ride out the downturn. Toyota, Skoda and Lexus will likely finish the year (only) down by around 19% with 65% of Toyota and 98% of Lexus having a hybrid powertrain, but Skoda also released both BEV & PHEV powertrains in 2020 and this should add just shy of 15,000 registrations to their number for the year.

Of the volume sellers we also see both Kia and Volvo being helped along by the electrification of their model line-ups. Heavy impacts on both manufacturers Petrol and Diesel registrations have resulted in the spotlight coming to bare on their PHEV, BEV & Hybrid (for Kia) and Mild-Hybrid powertrains. Kia are likely to see between 80,000 – 90,000 registrations from these powertrains while for Volvo this could equate to around 55,000 – 65,000 registrations.

Whether or not the Pandemic accelerated or just brough it even more into focus, the electrification of model line-ups for OEMs is likely to formulate an ever-increasing amount of their total registrations. This trend is not only based on the 2021 CO2 targets required, though it certainly gave the direction, but as governments, businesses, private consumers also further embrace the technology and its benefits. It also appears that those who move quickest (at bringing these powertrains into play) will reap the biggest rewards. 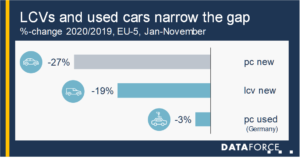 The second half of the year points to two segments that experienced tailwinds from the crisis and this is an opportunity for dealerships and rental companies to compensate for some of their losses. The first trend is the refocussing in logistics. The boom of home delivery can only be met with a decentralised logistics that requires many lcvs instead of a few hcv transports.

Admittedly, the lcv market took a toll as well as was down by 19% for January-November, but when

considering only registrations between June and November, i.e. the six months since the lockdowns have been relieved, we already see a 1% increase. Even countries such as Italy and the UK where the passenger car markets recorded the highest losses did post a growth for lcvs and a growing share of them was registered on behalf of rental companies.

The second opportunity is the raise in individual mobility. (E-)Bike demand was so high that some models had delivery times that before were only seen for cars. And when it comes to longer distances or faster travelling then the car is on vogue again. People have spent their holidays in their countries and got there by car, many of them resorted to rental vehicles. The same is true for daily trips. Car sharing and at rental bookings exceeded pre-crisis levels in some of the larger cities.

Those individuals who need to commute on a daily basis once again seek to own a car and given the economic uncertainties, many of them have turned to the used car market. As result residuals have been on the rise all over Europe, which is quite unusual in the middle of a recession.

A closer look at German used car figures confirms this trend. Following a loss of 282,000 registrations in April (-44%), the market has narrowed the gap to 2019 in each of the following months. For January-November 2020 it is now a mere 3.0% below corresponding figures from 2019. This is even more noteworthy when taking into account the supply shortages from the plunge in dealership and manufacturer’s self-registrations.  Removing less than one-year-old cars from the board brings January-October figures as close at 1.8% to 2020 comparatives and November and December should be able to close the remaining gap.